Curtin University provides an extensive range of training programs in the area of school‐based sexuality and relationships education (SRE). We oﬀer training opportunities for both pre‐service and in‐service teachers, and strive to provide all our attendees with ongoing support. Our programs are also suitable for school administrators and community health nurses who work in schools.

Additional events will be scheduled throughout the year, so please email jacqui.hendriks@curtin.edu.au if you wish to join our mailing list.

Please contact us if you are interested in enrolling in any of our undergraduate or postgraduate units dedicated to school‐based SRE. Students from other WA universities may be eligible to enrol.

Visit www.sreteacherproject.eventbrite.com.au for more information and to register

(Registrations open a few months prior to each event) 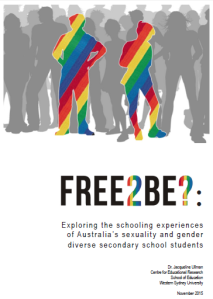 This report details the findings from a 2013 nationwide survey of sexuality and gender diverse Australian secondary school students.

The project’s core aims were to 1) gain a better understanding of how sexuality and gender diverse students experience their school’s ethos, referred to here as school climate, with regards to sexuality and gender diversity in the broad sense, and to 2) investigate links between students’ reported school climate and various measures of their school wellbeing and associated academic outcomes.

The young people in this study attended schools from across the sector, with the majority of participants attending government schools (62%). Participants overwhelmingly depicted a secondary schooling environment in which marginalising (e.g. homophobic/transphobic) language was rife and where school staff did not respond with consistency.

A startling 94% of students had heard homophobic language at school, with 58% of these young people reporting hearing this language daily. Of those who reported classmates using this language within earshot of school staff, less than 5% reported that these adults always intervened to put a stop to its use.

Participants depicted inconsistencies in adults’ responses to school-based marginalisation ranging from purposive ignoring (and, in the worst cases, active participation in the marginalising behaviours) to addressing the discrimination and attempting to educate around the incident. Most participants who described an educative intervention highlighted specific teachers at their school who would respond in such a manner, in contrast to a majority of others who would not.

Approximately 40% of students reported that they knew where to go to locate information and support regarding sexuality and gender diversity and similar percentages of students could recall their teachers engaging with sexuality and/or gender diversity in a positive or supportive fashion at least “some of the time” or more frequently. However, only one quarter of participants’ could recall classroom learning about topics related to sexuality and/or gender diversity in any kind of formal capacity, with a mere 3% of students reporting that it was “definitely true” that they had learned about lesbian, gay, bisexual and transgender identities during their Health and Physical Education instruction.

Findings suggest that some school staff work intentionally to support sexuality and gender diverse students in a variety of informal ways, including general positivity with regards to related topics and the provision of inclusive resources, but that formal curricular inclusion is far less common.

Participants attending schools in which their school harassment policies explicitly included sexual orientation as a considered and protected cohort of the student population (16% of participants) were significantly more likely to report their teachers’ intervention in instances of verbal and physical marginalisation of sexuality and gender diverse students, as well as their general positivity and support.

Students attending schools with fewer instances of marginalising behaviours, and more consistent adult intervention when those behaviours did occur, were happier and more connected at school, safer and more likely to feel as if their teachers were invested in their personal academic success.

Likewise, reported teacher positivity and support for both sexuality diversity and gender diversity were significantly correlated with students’ school wellbeing outcomes, with the strongest relationships present between teacher positivity and both student morale and sense of connection to school. Similar relationships were found between school wellbeing outcomes and students’ reported formal inclusions (e.g. within health and physical education and elsewhere within the curriculum).

Most of the sexuality and gender diverse young people who contributed to this research attended secondary schools in which marginalising practices occurred on a weekly, if not daily, basis and where teacher positivity and formal inclusions of sexuality and gender diversity were the exception rather than the norm. Project findings highlight the relationship between sexuality and gender diverse students’ perceptions of their school climate and their own school wellbeing, including connection to their peers, teachers and investment in the schooling environment more generally, and demonstrate how these key factors are linked to academic outcomes for this cohort.